Bang the Drum Slowly -- and gently at this price 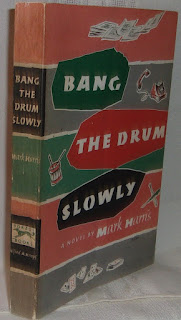 Mark Harris' Bang the Drum Slowly is generally regarded as one of the best baseball novels ever penned. If you're in need of a copy, you can find plenty of them on eBay for a reasonable sum. Or you can invest a bigger chunk in a first edition advance copy from 1956. Yours for a mere $250.
Just make sure you don't drop it in the bathtub while you're reading it.
Posted by JamesB at 3/29/2022 04:23:00 PM No comments: 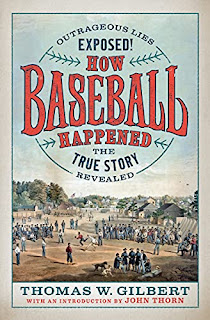 Screwball Times - The true story of how baseball happened

Ten years on, The Might Have Been remains a debut novel deserving of a wider audience 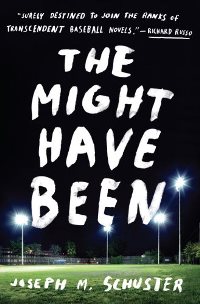 It was ten years ago this week that Joseph M. Schuster's novel The Might Have Been was released. Six months after Chad Harbach's The Art of Fielding pushed baseball into the popular fiction conversation, The Might Have Been made little more than a ripple. Perhaps you missed it altogether. If so, this under-the-radar debut is one worth circling back for.

Here's my review, which ran in Baseball America back in March 2012:

In one of the most quoted lines in Jim Bouton's classic Ball Four, he muses "You see, you spend a good piece of your life gripping a baseball, and in the end it turns out that it was the other way around all the time." This is what makes it so difficult for men to walk away from the game, why men, whose own playing days are well behind them, are willing to ride buses across the heartland, hopping from small town to small town, missing their families, eating fast food at irregular hours, sleeping on lumpy mattresses in a different motel every third day.

The game is a drug many old ballplayers are too weak to resist, its allure perhaps strongest to those whose career didn't follow the course they had mapped out as kids. Edward Everett Yates never envisioned it would take him ten years to reach the St. Louis Cardinals. His long-imagined debut hadn't included being ordered to bunt in his first—and only official—plate appearance. He may have dreamed of hitting for the cycle, but nowhere in that vision was the game washed out of the record books as he hung by his cleats from the outfield fence in Montreal, rain pelting his face as pain pulsed in waves from his shredded knee up through his body until he finally blacked out.

To tab Yates, or Edward Everett as he's called throughout, the hero of Joseph Schuster's The Might Have Been is to upsell his lot in the baseball landscape. There's little heroic about him, next to no glamour in his life once he returns to the bush leagues, never again to sniff major league air. As a young man his self-absorption sows the seeds of the loneliness that will plague him well into middle age when he moves into the coaching ranks. His only constants are baseball and regret, and in many regards the former fuels the latter.

What might have been for Edward Everett had he not leapt for that home-run ball in Montreal? His life, in his reflections, is a series of what-ifs, not all of which date back to that fateful game. When he, as manager, is burdened with informing his players that the organization no longer desires their services, he wants to tell them to find something else to do with their lives. Sell flour. Sell straw. Move on. "Be grateful for the life you have rather than regret over the one you don't."

Through Edward Everett, Schuster illuminates a side of the game utterly devoid of glamour and often even hope. For every young man who dreams of making a living under the lights, or every middle age office worker imagining how things might have turned out differently had he only been able to hit the curve ball, here's a reminder that the game doesn't always romance those who sacrifice their life and heart to it.

Cardinals first baseman Paul Goldschmidt posted a 1.020 OPS over the second half last year. Over the offseason he added a new weapon: a custom crafted bat, designed to increase his bat speed.

“We’re looking for subtle changes,” he said. “As much as you’d like to go, man, I’m going to hit the ball 5 mph harder, I just don’t know if that’s realistic. But if every year, or throughout the year, you’re looking to get a little bit better in a number of ways, you can make changes. There’s always a new guy coming into the league who is trying to get better.”

Goldschmidt said he would have explored the bat-fitting earlier in his career if the concept had been available. He likened visiting a lab in Baton Rouge and its advanced tech to any tool a player has — as important as dining with veterans and seeking advice was when he was younger or the cage work with coaches has always been.

A successful hitter seeks any improvement he can get his hands on.

“You have to adapt,” Goldschmidt said. “That’s what I’m trying to do. If there’s something that can potentially help, you’ve got to do it.”

Read the full story by Derrick Goold at the St. Louis Post-Dispatch. 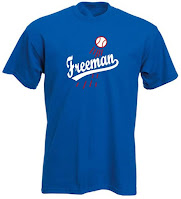 Still having a hard time picturing Freddie Freeman in a Dodgers uni? Well, maybe it would be easier if you could first see yourself in a Freeman Dodgers t-shirt.
That baby is already available on Amazon, and probably a dozen other places. No, it doesn't technically say "Dodgers" on it, but you sure can shave a few days off the whole time-to-market thing if you skip the officially licensing part of the process. Just don't wear it to Giants camp and ask Brandon Belt for a baseball.
Posted by JamesB at 3/20/2022 09:26:00 AM No comments:

I'm not sure if the curious case of Sam McWilliams went over my head or under my radar last spring, but I would slap my hand down on a stack of bibles and swear I never heard of the guy until this story popped into my timeline. I'm only sorry there wasn't a French horn involved. That anyone ever expected big things of McWilliams last spring, well, total news to me. That it didn't happen, I guess that's not as big a news bulletin, considering I never expected it to.

A year ago, Sam McWilliams was in major-league camp for the Mets, who won a bidding war for the then-25-year-old minor-league free agent, awarding a big-league deal and a record $750,000 contract to a pitcher who had yet to make his debut in the majors.

McWilliams, who had an 8.18 ERA in Triple A in 2019, was lauded as a new-age success story, as a guy who transformed himself with advanced analytics and Trackman, a high-tech device that records the speed, spin and shape of every pitch. He was on the cover of Sports Illustrated as the poster boy for the next wave of pitchers in baseball, a symbol of what savvy front offices like the Rays — where McWilliams spent 2019— and modern data could unearth.

Until all that information started making his head swim and clouded his mind. McWilliams, over coffee in Arizona earlier this month, said he dealt with a case of the yips in 2021 that caused him to dread playing catch and have no clue where the ball was going once he released it.

“I don’t really like using that word,” McWilliams said of perhaps the most feared four-letter word in baseball, “but yes (the yips) is what it was.”

The full story is on the Athletic. Yippee-kay-yay, Sam. And good luck straightening all that out.

Who's catching for the Twins? What day is it?

Ryan Jeffers entered last season as one of the Twins' top prospects. Though he struggled at times, he connected for 14 home runs in just 267 at-bats and entered this spring as a candidate for significant playing time behind the dish. Within two days veteran Mitch Garver and fellow youngster Ben Rortvedt were sent packing, leaving Jeffers as the sole survivor who will likely split time at catcher with newcomer Gary Sanchez.

The three lockers were all together in the Twins' spring clubhouse, a catchers' corner where Mitch Garver, Ben Rortvedt and Ryan Jeffers would prepare for working behind the plate each morning. So when Jeffers reported to camp Sunday, the day after Garver was dealt to Texas, he could feel a survivors' bond with Rortvedt, unspoken but real.

"It was a good vibe, like, 'It's just us now. We work really well together, so let's go get it done,'" Jeffers said.

One day later, that vibe was gone — because so was Rortvedt.

"It's been a little crazy, kind of a whirlwind," Jeffers said Monday. "You have a couple of guys you've worked with, gotten to know, for a couple of years. And all of a sudden, they're gone."

Read the full story at the Star Tribune. 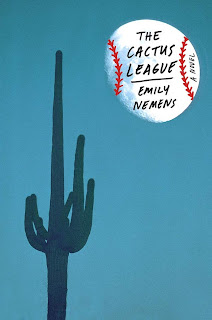 Breakout baseball novels come along about as frequently as perfect games. It's been two years now since Emily Nemens' The Cactus League hit bookstores, just in time for spring training. No coincidence that, after all, the book opens, "Welcome to Salt River Fields, the newest spring training facility in Scottsdale, Arizona." The entire story takes place in one preseason camp, set in 2011, and now that we are finally underway on this one, more than a decade later, it feels like a good time to crack it open once again.

Spring Training is finally opening. Finally baseball on TV again, and so much to look forward to. But we interrupt the good news with a heartbreaking but very well written story on former MLB reliever Jim Poole, who received a diagnosis no one ever wants to hear.

A suburban Atlanta high school baseball team was practicing an infield-outfield drill last April when an errant throw skipped beyond the foul line.

Jim Poole, who spent 11 seasons as a left-handed specialist with the Orioles, Indians, Giants and five other big-league teams, reached down and snagged the ball with his pitching hand.

As the high schooler approached to retrieve the ball that afternoon, Poole flipped it underhand.

“It went about 12 feet forward and almost all to the right. It was really weird,” Poole said. “Let’s just say the kid looked at me and never would have believed I had ever earned a living playing baseball.”

By then, Poole knew something was off. His left arm — his moneymaker all those years — had been weakening for months. He assumed all those hard sliders had finally sought retribution from his elbow and shoulder.

Give the full story a read at The Athletic.

Now that we have baseball again, it's time to gear up for your fantasy and Strat leagues. The best advice this spring is to grab the book (or magazine) with Shohei Ohtani on the cover. Wait, isn't that all of them? 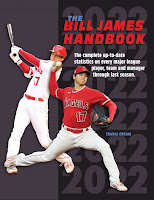 Here's Ohtani doing double duty on the cover of The Bill James Handbook. 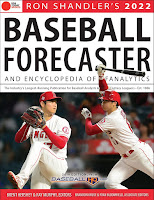 And here he is pitching and hitting on the cover of the 2022 Baseball Forecaster. 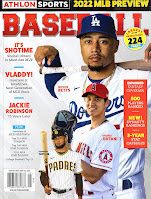 Mookie Betts might be towering over him on the cover of Athlon Sports' MLB Preview, but note that Ohtani's feature gets top billing. ("It's Shotime." How creative.) 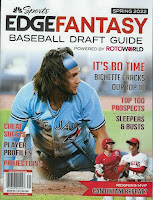 Give a little credit to the Edge Fantasy Baseball Draft Guide for doing something different. Yeah, they went double Ohtani, but Bo Bichette gets the main image on the cover.
Posted by JamesB at 3/12/2022 03:11:00 PM No comments: