Seattle's Brash didn't come out of nowhere--it was actually Kingston

It only seems like Seattle righthander Matt Brash came out of nowhere. The fireballer may go down as one of the PTBNL steals of the decade, but before he became "the guy from the Padres," he was the kid from Kingston.

In a town much better known for its hockey, Brash grew up playing baseball and basketball. The local boy made good last week, becoming the first Kingston product to appear in a major league game.

Nine Kingston baseball fans, enough to form a team on the field, gathered at the The Brass Pub on Princess Street to watch and support Kingston’s Matt Brash, 23, make his major-league debut with the Seattle Mariners late Tuesday afternoon.

Brash, a graduate of the Kingston Thunder baseball organization and the Bayridge Blazers, was starting his first American League game, in Chicago against the White Sox.

Brash also retired three straight in the second inning at Guaranteed Rate Field but caused some concern among the group of six supporters at one table when he took a hard ground ball from Eloy Jimenez off his left ankle before throwing him out for the second out of the second inning.

“Don’t take him out. I just ordered another beer,” one of the patrons at the table said.

You can forgive fan sites for pumping up prospects. You know the team-centric blogs that crank out postings on seemingly every minor leaguer in the organization, leaving readers to sort through the hyperbole. You might have seen commentary like "I can’t wait to see Player X get an opportunity to shine. Some of the best baseball players in history don’t have elite tools; they have elite consistency."

When Player X reaches the majors with 15 career minor league home runs and 88 RBIs in 217 games, I forgive you for not completely buying what the fan blog in question is selling.

But when Player X turns out to be Steven Kwan, who starts his big league career on a 9-for-13 tear, after having hit .469 in 32 spring training at-bats, maybe it's time to tip our caps to Covering the Corner, SBNation's Cleveland Guardians community.

When naming Kwan the organization's No. 11 prospect over the winter, the site said this, among many other flattering things:

What I can believe in — slick-fielding outfielders with a knack for contact and an aversion to making outs. Kwan’s career minor league slash line is .301/.380/.438. That includes .328/.407/.527 between Double-A and Triple-A last season. He did not slow down much when he hit Columbus.

I’m going to say this exactly once: stop complaining about the Guardians failing to re-sign Michael Brantley if you cannot celebrate a prospect with a nearly identical skill set. We have become completely obsessed with power in the modern game and it is beginning to kill the sport.

Kwan was not an overly hyped prospect, even for a fifth-round pick (2018). Fangraphs listed him as its No. 49 talent in the Guardians system coming into the 2021 season. That was out of 49 players they bothered to write up. They haven't yet released their 2022 list, though it's a good guess he'll rank a bit higher this time around.

Of 2022 lists available, Kwan didn't appear in Baseball HQ's top 15 for Cleveland, nor Baseball America's top 10. In hindsight, they may wish he had.

Then again, time may prove them correct. Perhaps we ought to slow our roll. It's been four games. But it's a lot of fun to see a guy get out of the gate like Kwan has, even more so if you happen to have spilled some digital ink three months ago trying to convince the skeptics he was worth a look.

Keeping your prospectus during jury duty 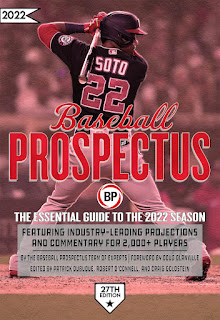 I had jury duty this week. My number came up, and it was low, and unlike last time I actually had to report. Tuesday, on short notice, I was summoned.

I reported at 1 pm and was made to wait in a big room full of other potential jurors. Other bored potential jurors. Everyone fixated on their phones, or on whatever books they brought in, and waited. I don't like to pry, but I did notice a guy at the table ahead of mine was reading the 2022 Baseball Prospectus. Hats off to him, it's not a light book, or something most folks would tote to jury duty. I myself brought a novel (A Spot of Bother, by Mark Haddon, which I'm enjoying to this point).

I wanted to find an excuse to talk to this guy, and ask him if he was prepping for a last-minute fantasy draft. I never found the chance. But I will offer some major props for hauling the big-ass Baseball Prospectus book through security, just to stave off jury-duty boredom.

A history of baseball biographies

Oh, the things you discover when googling other things. Like you search for "on this day in baseball book history" and you land on a fascinating history of baseball biographies in the 1950s and 60s, including a plunge into a lawsuit filed by Hall-of-Famer Warren Spahn against a publisher who just made up a bunch of stuff to make him sound even more heroic than he already was.

Spahn's was just another in a long line of biographies marketed toward kids, because there wasn't any interest in them from adult readers. When you see those old hardbound books and they all sound like cover-to-cover hero worship, know you know why.

So, you may not mean to look for Charlie Bevis' baseball research blog, but you'll be glad to find it anyway.